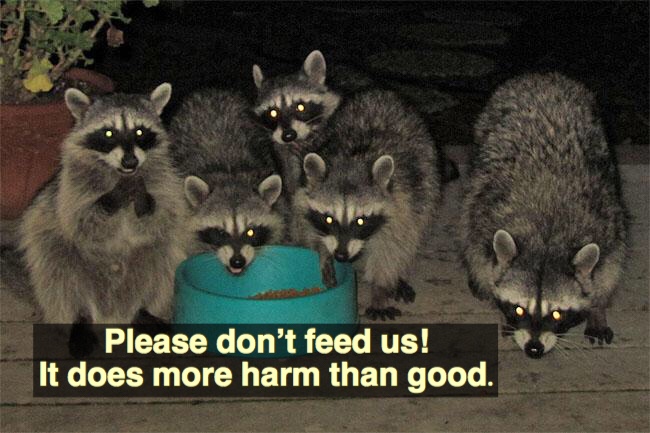 I would never be upset with anyone who is trying to help wildlife. I love Tennessee’s native wildlife so much that I’m dedicating my life to protecting them. If you follow For Fox Sake, you obviously care, too. For many wildlife lovers, feeding raccoons and other animals seems like a great way to give your wild neighbors a hand.

The problem is that this almost always backfires catastrophically. Here are a few examples of ways that I have personally witnessed raccoon-feeding go horribly wrong:

-Last summer and fall, I received to 29 calls about raccoons with distemper— a very serious viral infection— in one small area on Chattanooga’s North Shore. Those 29 raccoons didn’t even include the ones that were picked up by our local animal control or dispatched on site by police. When responding to one of the calls about this epidemic, I was informed by the caller that he “took care of” a large colony of wild raccoons, skunks, opossums, and feral cats, who would come to his house nightly to feed. This man didn’t mean to do it, but by creating a small area where animals would gather and eat from the same dishes, he had made his home ground-zero for a fatal epidemic. To make matters worse, this cross-species virus likely went on to infect many pet dogs in addition to native wildlife.

-I received a call last summer about a pair of adolescent sibling raccoons who were “tormenting” people in their neighborhood by begging for food and attempting to break into houses. They began doing this because someone in the neighborhood had fed their mother when she was nursing, and she taught her sons to seek out humans for food. The raccoons were ultimately declared pests and killed, through no fault of their own.

-A young child in had become accustomed to their nightly raccoon visitor. As children tend to do, the kiddo decided to befriend the critter and snuck outside to pet it. The raccoon was startled and bit the child, who needed a series of painful, expensive post-exposure rabies shots.

If you want to help wildlife, there are much better ways to do so than by feeding them. You can volunteer at your local nature center or wildlife rehabilitation center, or make a donation of food, funds, or supplies. You can make responsible choices like recycling and using less plastic. You can choose to keep your pets fully vaccinated to avoid contributing to the spread of diseases in wildlife. Depending on your state regulations, you might consider offering your property as a release site for rehabilitated wildlife.

We should all take steps to care for wild animals. Let’s make sure those steps are the right ones.