Yet predators, in nature, get a bad reputation. I have seen people who consider themselves to be advocates for animal welfare, justifying killing animals such as foxes, bobcats, and coyotes because they find it cruel that these animals hunt and eat their own natural prey. In my own neighborhood last year, a neighbor called for someone to “do something about” a fox who was seen on her property because it had killed a wild cottontail. 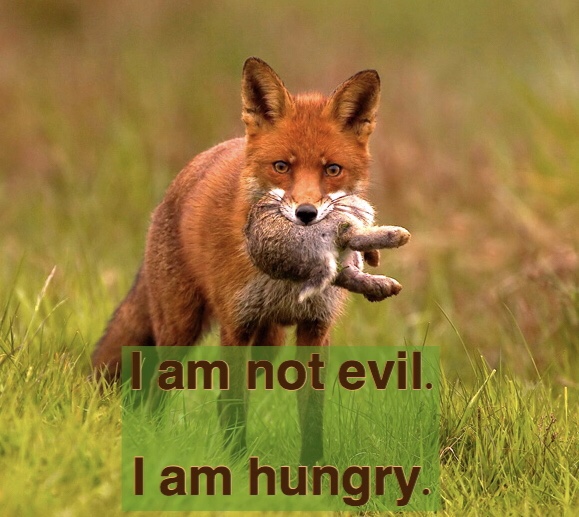 In another case, a man intervened and chased away a hawk that had snatched a fledgling robin, and then brought the robin to me for rehabilitation. The robin was too badly injured to survive and needed to be euthanized, but the unfortunate hawk never got to finish his meal.

Predators aren’t cruel or villainous. They simply are. And they fulfill a vital role within nature. When predators are removed from any ecosystem, it causes a catastrophic increase in the number of prey, which can lead to the total collapse of an ecosystem. In areas where large predators have been removed, whitetail deer are now so severely overpopulated that they pose a serious threat to forests and suffer from unprecedented rates of disease and starvation. It isn’t cruel to allow natural predators to hunt their natural prey— in fact, it’s far more cruel to remove those predators from the systems that depend on them.

It’s understandable to have sympathy for prey animals. But please remember that predators need to eat, too, and that their role in the natural world is a vital one.