How Do Cactus Bucks Happen? 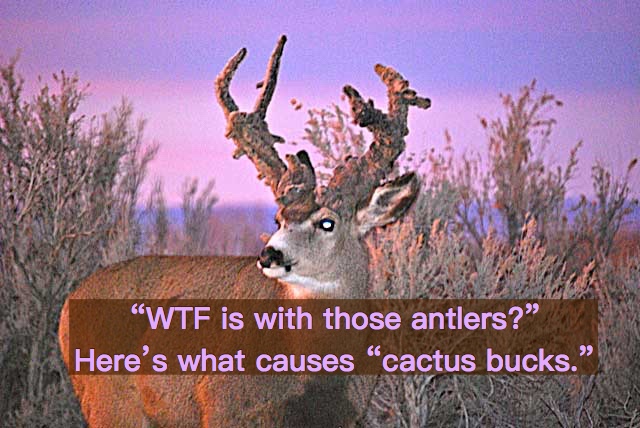 Deer like this are a rare sight, but have been spotted almost everywhere in the United States, and in almost every species of deer. These cactus bucks, as they’re called stand out because of their bizarre, deformed antlers covered in irregular growths.

A cactus buck’s irregular antlers develop due to low testosterone levels, which cause the buck’s antlers to produce velvet year-round. There are a few reasons these hormonal imbalances night occur. The most common cause is that one of both of the buck’s testicles are undescended. Another is that the buck caught a disease called epizootic hemorrhagic disease, which can damage the testicles. Occasionally, a buck will be accidentally castrated— for example, by a barbed wire fence— and will develop “cactus” antlers as a result.

Most cactus bucks are infertile and a few live with chronic pain or infection due to their conditions. If you spot a cactus buck who appears to be suffering, it may be worthwhile to call your local game wardens or wildlife rescue to see if the animal needs assistance.