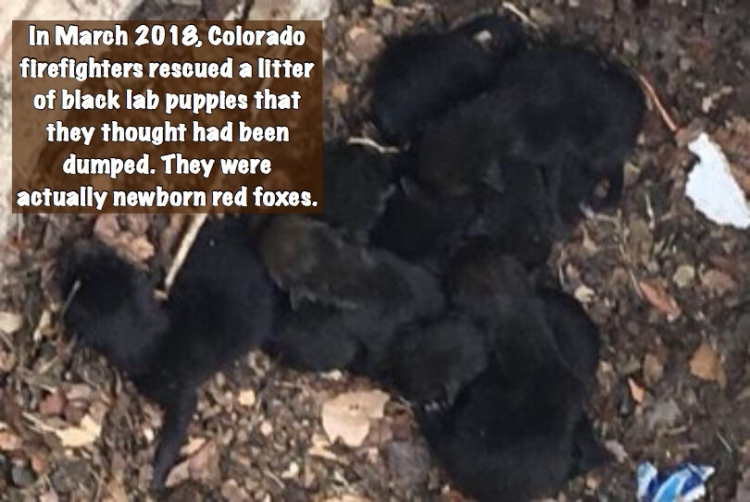 Animal mix-ups are a strange– and sometimes hilarious– part of wildlife rehabilitation. Here in Chattanooga, we’ve had calls about foxes that turned out to be coyotes, squirrels that were actually raccoons, and my personal favorite: a hawk that couldn’t fly, which was actually somebody’s pet chicken.

Colorado Springs rehabilitators got to deal with a similar mix-up when firefighters responded to a call about a litter of tiny black lab puppies that had been abandoned in a storm drain. The firefighters gently captured the “puppies” and brought them to the humane society, where they were informed that the puppies were actually red foxes.

It’s common for red foxes to be black or dark brown at birth, so it isn’t unusual that these kids looked like puppies to people unfamiliar with wildlife. But it’s also possible that the kits stayed black.

Despite their name, red foxes can be many colors, including melanistic. Melanistic red foxes are black in color with a beautiful silver overcoat. Because of the silver overcoat, they are often referred to as “silver foxes,” but they are the same species as ordinary red foxes.

Unfortunately, only half of the kits– five out of ten– survived their first week of life in captivity. Captured wild animals often succumb to a tragic and complex condition known as , caused by the stress of being taken into captivity. This highlights the importance of never capturing wildlife except in emergencies.

The survivors were, fortunately, cared for by permitted rehabilitators and successfully released to the wild.