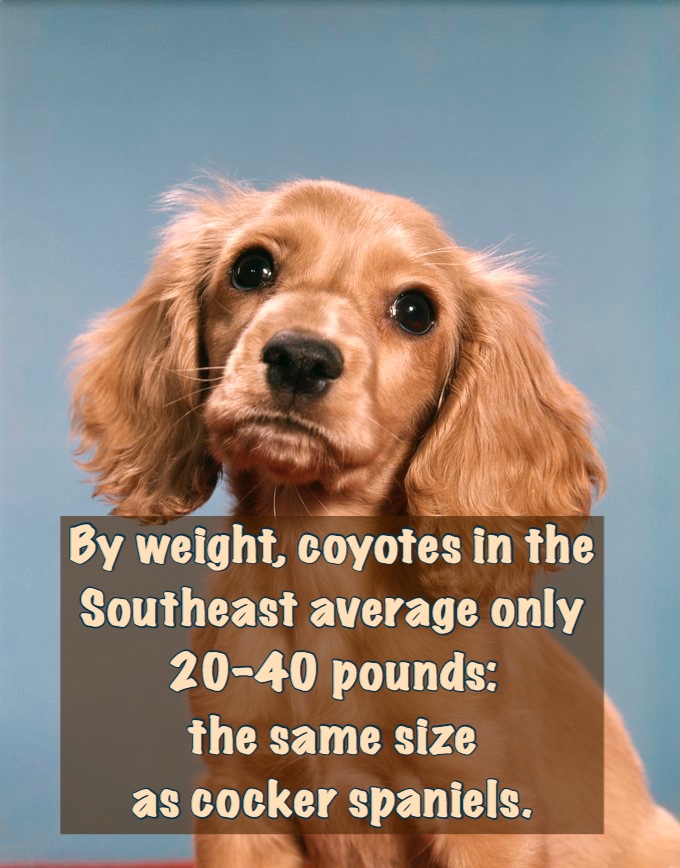 Many people who have seen coyotes estimate that they’re at least the size of German shepherds, but coyotes are actually pretty small, weak animals. Out West, a typical coyote weighs a puny 16-18 pounds. Here in Tennessee, where they owe much of their ancestry to red wolves and feral dogs, coyotes are larger, but still tend to be in the same size range as a medium-small dog breed like a cocker spaniel or a corgi, with the largest males maxing out at the size of a typical border collie.

You certainly wouldn’t want to try to fight off a coyote, and it is extremely unwise to leave children and small pets unattended at dawn and dusk. But most humans have absolutely nothing to fear from the shy, nervous, relatively small coyote. In all of American history, coyotes have only been known to kill two people. You’re much, much more likely to get killed by a stray dog, a bee sting, or even a feral cat than by a coyote.

So why do we collectively imagine coyotes as enormous and dangerous? It’s likely a quirk of human psychology in response to fear. Any defective knows that a frightened witness will tend to over-estimate a criminal’s height by several inches, in reflection of her sense of intimidation. A child will often claim to have seen a spider the size of a fist, in areas where no such spiders exist. And there’s also the simple fact that coyotes are built very lean and light, with fine bones but thick fur, so they appear bigger than they are.

Use common sense around all wildlife— don’t assume that any wild animal is “safe” to handle, approach, or provoke. But the coyote in your neighborhood isn’t likely to eye you as its next meal and wouldn’t likely have the strength to do so.