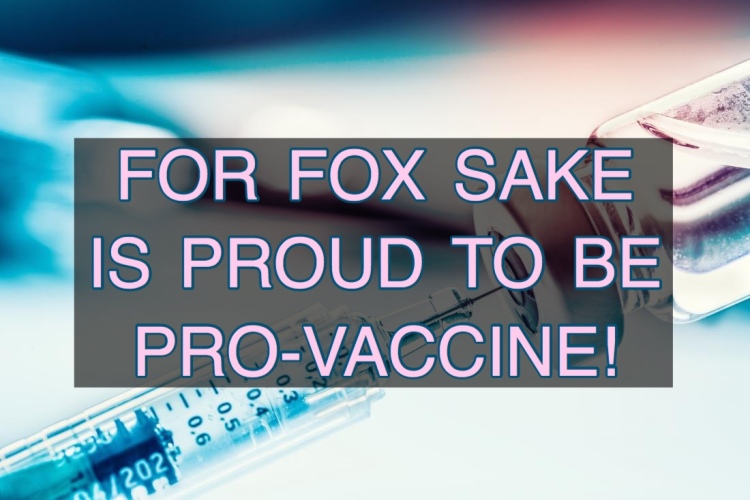 Our recent post about the USDA’s oral rabies vaccine generated a lot of controversy! Commenters made claims that— among other things— rabies vaccines spread rabies and contain ground-up human baby parts.

The oral rabies vaccine is distributed by the USDA, not For Fox Sake, but we’ve received similar criticisms whenever we’ve mentioned vaccinating the animals in our care.

For the record: For Fox Sake is an explicitly, unequivocally pro-vaccine organization, and we believe that vaccination is an essential part of responsible wildlife rehabilitation. When animals are brought into rehabilitation, it involves taking animals with unknown medical history, from multiple areas, and putting them in unnaturally confined and crowded spaces.

This puts them at an unnaturally and unreasonably high risk for vaccine-preventable illnesses like canine parvovirus, canine distemper, panleukopenia, bordatella, and yes, rabies. If unchecked and unprevented, these serious illnesses cause extreme suffering and preventable death in wildlife and also pets. We believe we have a responsibility to prevent these illnesses whenever possible.

It’s easy to be opposed to vaccines for wildlife if you haven’t seen these illnesses in person. Several times per week, we’re forced to euthanize animals who are terminally ill, and it is the most painful and traumatic parts of what we do. Animals who become sick in the wild don’t just lie down and die. We’ve seen— as one single example— a fox covered in her own bloody, maggot-infested diarrhea and vomit, having seizures and screaming in pain and confusion. If you believe that an animal should be forced to suffer through such a thing simply because it is “natural,” your beliefs are incompatible with support for For Fox Sake’s mission.

We also have a duty, based on state law as well as basic ethics, to vaccinate all animals in our care for rabies. Unlike our grandparents’ generation, which was plagued with rabid dogs who roamed the streets, we benefit from the mass vaccination of domestic animals and the relative rarity of human rabies infection. We want to be part of the goal of eventually eradicating rabies from the United States, and believe that we are helping to accomplish that by immunizing all animals in our care and submitting all animals with neurological symptoms for rabies testing.