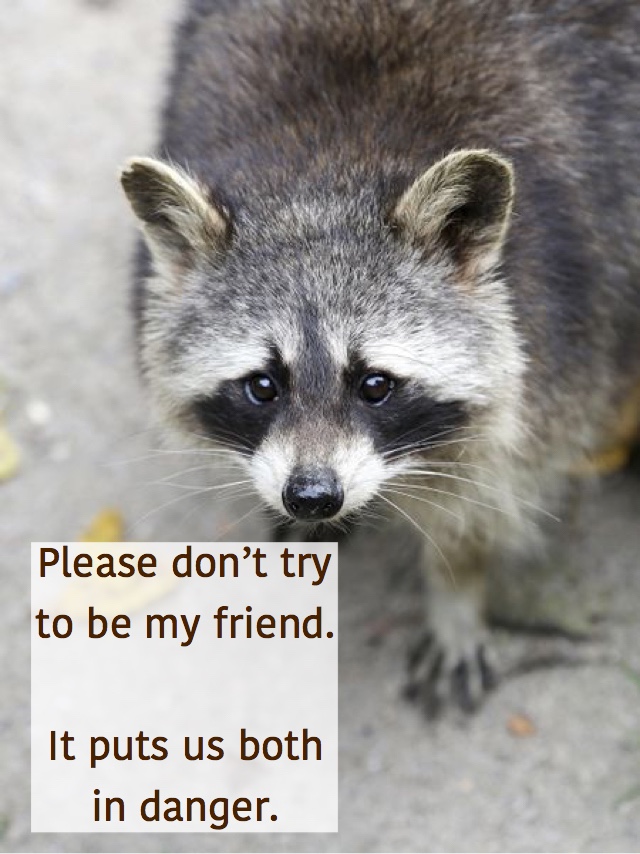 It’s not uncommon for people to attempt to befriend wildlife. They start by leaving food on their steps, then offering food by hand, then eventually petting and even holding the animal. It sounds like a magical experience, but this temporarily rewarding moment can be a death sentence for the animal.

Raccoons in particular are at risk from people trying to befriend and tame them. As one of the more common carriers for rabies, raccoons are quickly euthanized when they appear to show unusual or fearless behavior. A raccoon who has been tamed by one person will quickly start approaching, following, or even aggressively harassing strangers, who understandably mistake this behavior for symptoms of illness.

Befriending a wild animal also isn’t good for you or your family. Wild animals can carry many diseases that are transmissible to humans and pets. Foxes carry feline and canine distemper and parvoviruses, while raccoons carry all of those plus a fatal form of roundworm. It isn’t worth the risk of exposing yourself or your pets to these risks.

If you’re interested in befriending wildlife, look into volunteering with your local nature center, zoo, or rehabilitators. Many have non-releasable wild animals in their care who you can meet.

← How Do I Get Raccoons to Leave My Attic?
Suburban Coyotes Save Lives →
%d bloggers like this: