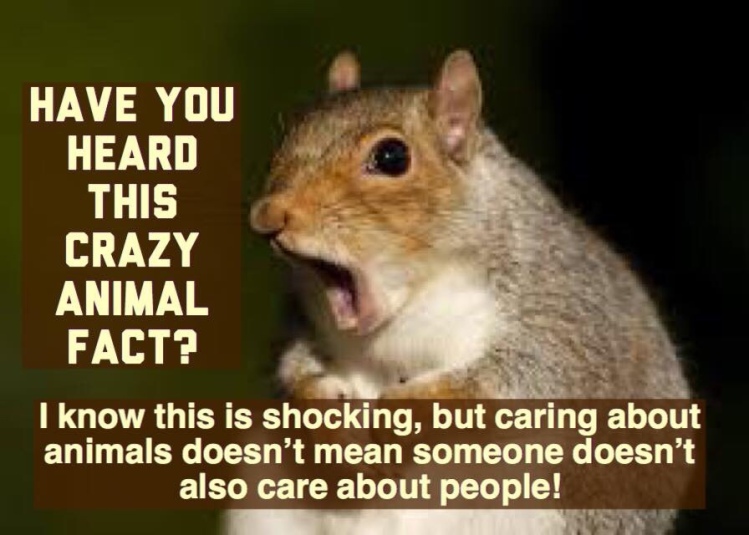 “Why do you care about animals when there are so many people in need?”

It’s a common, but baffling, criticism that wildlife rehabilitators and other animal rescuers often hear.

Most people are capable of caring about more than one thing. Although I’m sure there’s some nutcase, among the seven billion people on Earth, who actually values the lives of animals over humans, but I have yet to meet them. Most animal lovers also care very deeply about issues affecting human beings. Saving an orphaned fox doesn’t mean that I do not also care about orphaned children.

Since I specialize in rabies vector species, I consider my work to be for the benefit of humans as much as it is for animals. For Fox Sake is on the border where raccoon-variant rabies is spreading westward. My work capturing, quarantining, vaccinating— and, when needed, euthanizing— high-risk animals helps control the spread of this horrible disease. It also gives people a safe alternative when they find orphaned animals, so they don’t resort to dangerously raising the animals themselves, potentially exposing their families to disease.

Much of the work of a wildlife rehabilitator is also in public education, not just when it comes to the safe handling (or avoidance!) of wildlife, but also techniques to coexist with our wild neighbors and to keep pets, livestock, and children safe without harming wild animals.

Animal rescuers shouldn’t have to defend what we do. I can’t say for certain that I’ve saved human lives but I can promise that my passion for wildlife doesn’t mean they’re the only thing I care about.